Groundbreaking advances in dental treatment could regenerate teeth rather than replace them.

10/02/2017  |  Tags: dental laser tips, laser in dental,
Arecent study could lay the ground-work for the development of noninvasive laser therapy that could dra-matically change dental treatment. The laser prompts human stem cells to form dentin, the calcified tissue that provides most of a tooth’s core structure.If it is found to be effective in humans, the new approach (detailed in Science Translational Medicine, May 28, 2014) could potentially eliminate the need for crowns, fillings and other complex—and often painful—dental operations in the fu-ture. “It would be a substantial advance in the field if we can regenerate teeth rather than replace them,” confirms study leader David Mooney, PhD, a faculty member at Harvard University’s Wyss Institute for Biologically Inspired Engineering. More important, the advance offers a more streamlined way to use endog-enous (i.e., already in the body) stem cells that lays the foundation for a wealth of new clinical applications. 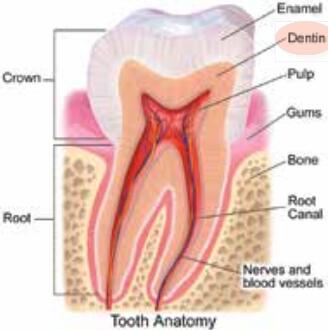 STEM CELL USE COMPLICATED. Given their unique regenerative abilities, stem cells offer many possibilities when it comes to treating diseases such as diabetes and heart disease. However, utilizing them for regenerative medicine currently requires that they be isolated from the body, manip-ulated in a laboratory using added growth factors or small molecules, and returned to the body. The process is complicated and costly—but the method developed by Pro-fessor Mooney and his team is simpler.
USING GROWTH FACTORS. The proce-dure’s success revolves around transform-ing growth factor beta (TGF-β). Growth factors are naturally occurring substances capable of stimulating cell growth and differentiation, and TGF-β plays crucial roles in embryonic development, wound healing, and the immune system.
GF-β exists in the body in latent form until activated, dental laser tips and this activation includes a wide range of biological and physical modalities. In their research, Professor Mooney and his team found that it was possible to activate TGF-β by exposing it to a low-power laser beam—and during preliminary tests of dentin tissues, the laser-activated TGF-β stimulated the stem cells already pres-ent in the pulp-dentin within the teeth. “Once TGF-β is activated by the laser, it can bind to stem cells residing in the tis-sue,” says Dr. Mooney. “Then it induces those stem cells to differentiate so they can form dentin.”OTHER APPLICATIONS POSSIBLE. The technique has proven successful in an animal model, triggering dentin forma-tion in lab rats and mice. As yet it has not been possible to regenerate an entire tooth—but merely getting dentin to grow could help prevent the need for root canal treatment, the sometimes-painful proce-dure to remove dead or dying nerve tissue and bacteria from inside a tooth.Human trials are currently being planned, and given the minute nature of rodent teeth, Professor Mooney says this is one of the rare cases where it will likely be easier to extend their research into people. It also should be easier for clinicians to utilize the new approach if human trials are successful. “Our treatment modality does not introduce anything new to the body, and lasers are routinely used in medicine and dentistry, so the barriers to clinical translation are low,” says Professor Mooney. The study’s lead author, Praveen Arany, DDS, PhD, an Assistant Clinical Investigator at the National Institutes of Health, agrees. “We are also excited about expanding these observations to other regenerative applications with other types of stem cells,” he adds.However,usersmayprint,download.