Oral squamous cell carcinoma (OSCC) is a lethal disease, with rising incidence. There were 6767 new OSCC cases and 2056 deaths in the UK in 2011. Cancers are preceded by oral potentially malignant disorders (PMDs), recognizable mucosal diseases harbouring increased SCC risk, offering clinicians a ‘therapeutic window’ to intervene. Contemporary practice remains unable to predict lesion behaviour or quantify malignant transformation risk. No clear management guidelines exist and it is unclear from the literature whether early diagnosis and intervention prevents cancer. Between 1996 and 2014, 773 laser treatments were performed on 590 PMD patients in Newcastle maxillofacial surgery departments. The efficacy of the intervention was examined by review of the clinicopathological details and clinical outcomes of the patients (mean follow-up 7.3 years). Histopathology required up-grading in 36.1% on examining excision specimens. Seventy-five percent of patients were disease-free, mostly younger patients with low-grade dysplasia; 9% exhibited persistent disease and were generally older with proliferative verrucous leukoplakia. Disease-free status was less likely for erythroleukoplakia (P = 0.022), ‘high-grade’ dysplasia (P < 0.0001), and with lichenoid inflammation (P = 0.028). Unexpected OSCC was identified in 12.0%, whilst 4.8% transformed to malignancy. Interventional laser surgery facilitates definitive diagnosis and treatment, allows early diagnosis of OSCC, identifies progressive disease, and defines outcome categories. Evidence is lacking that intervention halts carcinogenesis. Multicentre, prospective, randomized controlled trials are needed to confirm the efficacy of surgery.

Oral squamous cell carcinoma (OSCC), probably the most common head and neck malignancy, remains lethal and deforming due to local invasion, orofacial destruction, metastasis to cervical lymph nodes, and blood–borne tumour dissemination.1 In 2011 there were 6767 new cases and 2056 deaths in the UK, whilst globally OSCC shows a rising incidence and a prognosis significantly compromised by advanced disease and late presentation.2

The ‘progression model’ for oral carcinogenesis proposes that, following irreversible genotypic mutation, phenotypic epithelial disorganization and dysmaturation changes occur, which, if allowed to progress, lead to invasive OSCC.3 Such features preceding cancer are identifiable microscopically and are collectively termed dysplasia.4 In clinical practice, assessment of the degree of dysplastic change is made following incision biopsy and classification into mild, moderate, or severe categories, according to the extent of atypical epithelium.5

It has been recognized for many years that a spectrum of distinct mucosal abnormalities, now termed potentially malignant disorders (PMDs) and which accompany dysplasia, may be identified clinically, albeit non-specifically, during oral examination. There is, therefore, an opportunity for early diagnosis and therapeutic intervention during this ‘oral pre-cancer window’.6 PMD encompasses primarily localized lesions such as leukoplakia, erythroplakia, and erythroleukoplakia, together with progressive multifocal disorders such as proliferative verrucous leukoplakia (PVL).7 ;  8

The identification of a PMD in a patient does not mean that malignant transformation is inevitable. Many lesions do not progress, whilst others resolve spontaneously, but it remains impossible in clinical practice to predict behaviour for individual cases. Nonetheless, patients with PMDs remain at increased risk of OSCC.9

‘Potential malignancy’ is difficult to define, so it is unsurprising that previous treatment interventions have been non-specific with ill-defined goals and end-points; the few clinical trials in the literature concentrate on medical therapies and are compromised by small numbers of patients and short study durations.10 No study has demonstrated long-term lesion resolution, reduction in disease incidence, or prevention of malignant transformation.11 Arduino et al. emphasized the need for long-term patient studies to improve understanding of the natural history of PMDs.12

A lack of insight into the progression of PMDs has resulted in a variety of proposed treatments based upon clinician preferences and experience. PMDs are mucosal lesions only, so do not require the aggressive treatment necessary for removal or destruction of invasive cancer. It seems self-evident, therefore, to intervene early to excise dysplastic tissue at this ‘pre-invasive’ stage. 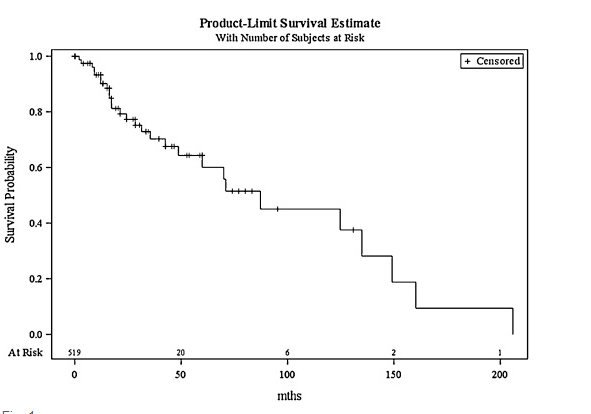 Previous studies on the treatment of PMDs are limited by small numbers of patients and varying follow-up periods. Detailed, long-term analysis of a large, well-defined PMD patient cohort undergoing coordinated treatment and follow-up was overdue.

In the absence of national PMD disease statistics or a robust evidence base for treatment, the aims of this study were to profile patient demography and clinicopathological data for a patient cohort presenting to a specialist PMD service in the north-east of England, to determine clinical outcomes following interventional CO2 laser surgery and to assess treatment efficacy and its influence on the progress of oral carcinogenesis.

Caldicott approval was obtained from the Newcastle University/Newcastle upon Tyne Hospitals NHS Foundation Trust to facilitate anonymized, retrospective data collection from the medical records, operating logs, and pathology reports of patients with PMDs treated at Newcastle Dental Hospital and the Royal Victoria Infirmary. Inclusion criteria required a new, untreated, single-site PMD, confirmed by incision biopsy. Patients with a previous or multifocal PMD and those with a history of OSCC or head and neck radiotherapy were excluded.
Patient and treatment details

The following demographic and clinicopathological details were collected for patients who had undergone CO2 laser surgery between August 1996 and December 2014: date of treatment, age and sex, clinical appearance and anatomical site of the oral lesion, histopathology diagnoses for incision and post-laser excision biopsies, follow-up data, and any further laser treatment. The clinical outcome was determined at the study census date (31 December 2014), unless malignancy supervened when this became the study exit point.
Histopathology diagnoses

Incision biopsies were performed under the direction of the first author (PJT) and excision specimens were obtained following interventional laser treatment, as detailed previously.dental laser handpiece,14 Laser surgery was performed by the first author (PJT), or by colleagues working under direct supervision; this was done within 6–12 weeks following incision biopsy to avoid disease progression. Formalin-fixed tissue specimens were assessed via standardized histopathology examination by oral pathologists at the Royal Victoria Infirmary working to agreed diagnostic criteria with peer review and consensus grading.4 Using the World Health Organization classification, specimens were graded as mild, moderate, or severe dysplasia, carcinoma in situ, or OSCC. In addition, the presence of hyperkeratosis and lichenoid inflammation (LI) was recorded, as well as diagnoses of PVL and chronic hyperplastic candidosis.
Clinical outcome categories

Clinical outcomes were stratified as disease-free or persistent disease (further PMD or malignant transformation). Success rates and 95% confidence intervals (CI) were calculated. Multivariate logistic regression was used to analyze factors potentially prognostic of a disease-free outcome (age at first treatment, sex, lesion appearance, anatomical site, and histopathology data). Relationships between factors were explored using χ2 tests for categorical variables or logistic regression to check for collinearity. Factors were first explored through univariate analysis and then a multivariate model was built using a stepwise procedure until all variables were significant at the 10% level. Candidate variables for the initial model were those significant at the 20% level on univariate analysis. If collinearity was suspected, only the most significant univariate relationships were included in the model. Malignant transformation was analyzed using univariate Cox regression to investigate clinicopathological variables that might influence time to transformation. All statistical analyses were performed using SAS/STAT 9.3 software (SAS Institute Inc., Cary, NC, USA).

In conclusion, this study has succeeded in providing data on the demographics and clinicopathological profile of PMD disease in the north-east of England, and has detailed long-term clinical outcomes following intervention. Optimal treatment requires consistent diagnoses, effective intervention, and coordinated patient follow-up. Whilst these were demonstrated in this study cohort, a reduction in overall cancer risk was not demonstrated, although the early identification and treatment of OSCC in 12% of cases probably justifies intervention alone. Whilst further analyses of cases with poor clinical outcomes (persistent PMD and malignant transformation) are warranted, the next major phase of research requires prospective, multicentre trialling, ideally internationally, to truly define the efficacy of interventional surgery.