08/08/2016  |  Tags: dental laser tips, dental laser,
A desktop diode pulsed laser having pulse width of 1.3 ps and wavelength of 1552 nm is utilized for pre- cise targeted ablation of dentin, enamel, and composite material while minimizing thermal damage to the surrounding healthy tissue and nerve endings. A thermal imaging camera is used to measure the den- tal surface temperature rise during ablation. Following ablation, scanning electron microscopy (SEM) and optical microscopy are used to determine the quality of ablation and the volumetric ablation rate as a function of laser parameters. Surface temperature measurements are compared with the numerical mod- eling results obtained using the transient heat conduction equation. A good agreement between experi- mental and modeling results for the surface temperature is obtained which ensures accurate prediction of the temperature distribution throughout the tooth using numerical models. The SEM generates images of precise ablation of each dental material when the optimal laser parameters are used and the sample is scanned at a velocity to limit the number of overlapping pulses. During the ablation process there is min- imal collateral damage to the surrounding healthy tissue and minimal heat spread throughout the tooth thus preserving the integrity of the pulp. 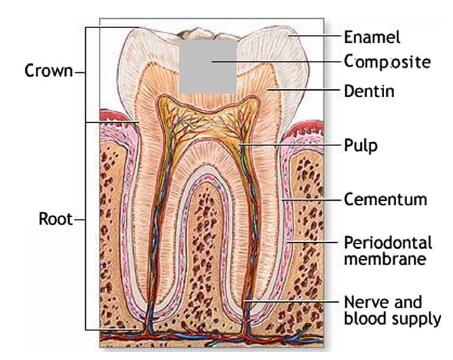