Mesoscopic modelling of the interaction of infrared lasers with composite materials: an application to human dental enamel

19/08/2016  |  Tags: Mesoscopic modelling, dental laser,
Abstract The mesostructure and composition of composite materials determine their mechanical, optical and thermal properties and, consequently,  their  response  to  incident  radiation.  We  have  developed  general  finite  element  models  of  porous  composite materials under infrared radiation to examine the influence of pore size on one of the determining parameters of the stress distribution in the material: the temperature distribution. We apply them to the specific case of human dental enamel, a material which has nanometer scale pores containing water/organic, and predict the maximum temperature reached after a single 0.35 m s laser pulse of sub-ablative fluence by two lasers: Er:YAG (2.9 m m) and CO 2 (10.6 m m). For the Er:YAG laser, the results imply a strong dependence of the maximum temperature reached at the pore on the area-to-volume ratio of the pore, whereas there is little such dependence for CO 2 lasers. Thus, CO 2 lasers may produce more reproducible results than Er:YAG lasers when it comes to enamel ablation, which may be of significant interest during clinical practice. More  generally,  when  ablating  composite  materials  by  infrared  lasers  researchers  should  account  for  the  material’s microstructure  and  composition  when  designing  experiments  or  interpreting  results,  since  a  more  simplistic  continuum approach may not be sufficient to explain differences observed during ablation of materials with similar optical properties or of the same material but using different wavelengths.
Keywords: Dental Laser; Laser ablation; Finite element modelling; Mesoscopic modelling; Er:YAG laser; CO 2 laser
1.  Introduction The  mesoscopic  structure  and  composition  of  a material can play a significant role in the mechanisms of laser ablation, since it determines the mechanical, thermal and optical properties of materials [1,2] . Yet, relatively  few  theoretical  or  computational  models account for this explicitly. The development of better ablation  models  should  allow  more  realistic  predic- tions of the influence of different laser parameters on ablation  which  will  play  a  key  role  in  optimizing ablation. We have developed general models to study the thermal and mechanical response of porous com- posite  materials  under  infrared  radiation.  Here,  we describe  an  application  of  these  models  to  human dental enamel.Currently,  the  ablation  of  dental  enamel  in  the context of caries treatment uses Er:YAG (l¼2.9mm) and  CO2(l¼10.6mm)  lasers  among  others,  but  is subject  to  problems  such  as  relatively  low  ablation rates  or,  when  higher  ablation  rates  are  wanted,  the possibility of cracking and unwanted thermal effects. If laser treatments are to become common practice, the procedures must be optimized to yield higher ablation rates while minimizing unwanted side-effects and, in the  framework  of  minimally  invasive  dentistry,  also ensure that precise, narrow tunnels can be drilled in teeth.
1.1.  Model description Human dental enamel is composed mainly of HA. It is known that enamel is porous to an extent, and that the  pores  contain  mainly  water,  but  also  a  small amount  of  organic  material;  the  exact  proportion  of water/organic, the pore size and area distributions, and pore connectivity are not known [6] . Based on this information the authors developed six fi nite  element  models  for  enamel  (using  Algor TM Version 13.14-WIN 15-FEB-2002), each representing a piece of HA surrounding a single cubic water-pore, and used them to obtain temperature maps caused by the absorption of a sub-ablative laser  pulse. The six models differ only on the size of the pore. The length of pore edges, l , varies between 30 and 130 nm (see Fig. 1 ). With   each   model  we   performed   transient   heat transfer  simulations  of  a  single  0.35 m s  laser  pulse for  laser  radiation  of l ¼ 2.9  and  10.6 m m,  using 28 timesteps of 0.0125 m s duration. We used 26,195 8-node  brick  elements  with  second  order  Gaussian quadrature  formulation.  The  mesh  was  made  sign- i fi cantly denser at the pore than in the zones surround- ing it. 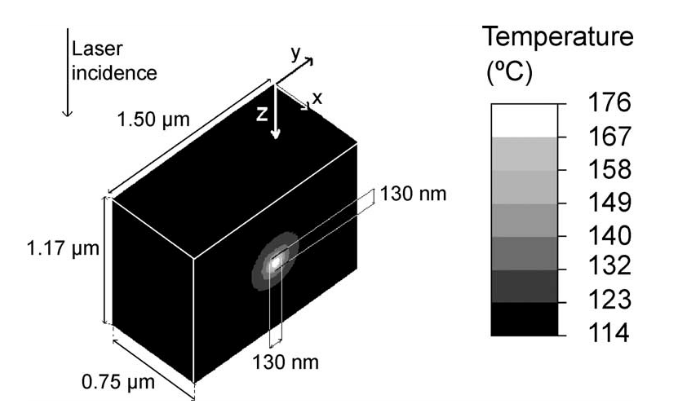 Conclusions Given the variability of the composition and mesos- tructure  of  enamel,  in  particular  in  pore  size,  and knowing  that  the  thermal  stress  generated  by  laser radiation is directly related to the temperature reached, our  simulations  suggest  that  the  results  of  ablating enamel using Er:YAG lasers may be harder to predict and reproduce from sample to sample than using CO 2 lasers. Researchers conducting experiments with these lasers, and even other IR wavelengths, may consider appropriate to select their samples attending to factors that could cause marked differences in water content, such as age or region in the tooth (see also ref. [11] ). Researchers  conducting  in  vitro  experiments  should also  pay  attention  to  possible  differences  that  could arise from using hydrated or dehydrated teeth, and also teeth  that  were  dehydrated  and  subsequently  rehy- drated. More generally, these results suggest that one of the  parameters  governing  ablation — the  tempera- ture — may  be,  for  certain  combinations  of  lasers and  material  properties,  strongly  dependent  of  the material ’ s  pore  size  and  area  distribution.  These results suggest that in order to accurately interpret information  resulting  from  ablation  of  composite materials, the material ’ s mesostructure and compo- sition  should  be  considered.  Researchers  ablating composite  materials  may  want  to  consider  these material  characteristics  when  selecting  samples  or analysing results.