01/09/2016  |  Tags: dental laser, dental laser handpiece,
Abstract
Laser ablation of dental hard tissues is one of the most important laser applications in den- tistry. Many works have reported the interaction of laser radiations with tooth material to optimize laser parameters such as wavelength, energy density, etc. This work has focused on determining the relationship between energy density and ablation thresholds using pulsed, 5 nanosecond, neodymium-doped yttrium aluminum garnet; Nd:Y 3 Al 5 O 12 (Nd: YAG) laser at 1064 nanometer. For enamel and dentin tissues, the ablations have been per- formed using laser-induced breakdown spectroscopy (LIBS) technique. The ablation thresholds and relationship between energy densities and peak areas of calcium lines, which appeared in LIBS, were determined using data fitting. Furthermore, the morphological changes were studied using Scanning Electron Microscope (SEM). Moreover, the chemical stability of the tooth material after ablation has been studied using Energy-Dispersive X- Ray Spectroscopy (EDX). The differences between carbon atomic % of non-irradiated and irradiated samples were tested using statistical t-test. Results revealed that the best fitting between energy densities and peak areas of calcium lines were exponential and linear for enamel and dentin, respectively. In addition, the ablation threshold of Nd:YAG lasers in enamel was higher than that of dentin. The morphology of the surrounded ablated region of enamel showed thermal damages. For enamel, the EDX quantitative analysis showed that the atomic % of carbon increased significantly when laser energy density increased.dental laser tips 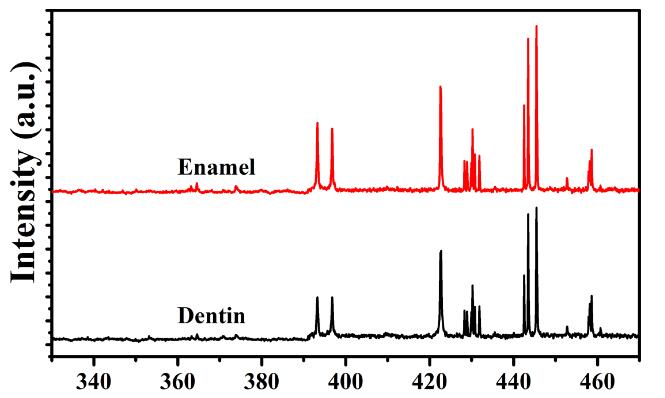 Introduction
In dentistry, cavity preparation is carried out through either a low-speed high-torque hand- piece or a high-speed low-torque handpiece [ 1 ]. Despite their efficiency, they are still somewhat painful, irritating, and noisy [ 2 ]. In addition, it is necessary to use local anesthetic for the majority of dental procedures. A continuous water spray is used in conjunction with the drills to balance the temperature produced by friction between the drill and the tooth. In addition, dentin contains a large number of nerve endings that are connected with the pulp [ 3 ]. The den- tin pain mainly arises from a rapid outward flow of fluid in dentinal tubules [ 4 ]. Lasers have been used in dentistry since 1964 [ 5 ] as complementary methods. They have been developed significantly for various dental applications [ 6 , 7 ]. Using laser in dentistry is comfortable almost painless as compared with conventional drilling systems. Therefore, the use of lasers in dentistry has increased markedly over the past few decades. They have been reported as potential tools for dentistry in many literatures [ 8 – 16 ]. Using lasers to ablate hard tissue may cause cracks and fractures, because they are prone to both shear and compressive stresses [ 17 , 18 ]. Despite these risks, they are still an attractive alternative. The risks of lasers can be avoided using the optimum parameters of laser hard tissue interaction. Therefore, deter- mining the laser parameters such as power density, wavelength, exposure time, repetition rate, and spot size [ 19 , 20 ] is substantial. The evolution of using lasers in dental hard tissue ablation can be found in many studies [ 8 , 10 , 21 – 29 ]. These studies were concerned on using different lasers with different pulse durations in dental hard tissue ablation. However, only few studies were performed to estimate the nanosecond (ns), neodymium-doped yttrium aluminum gar- net; Nd:Y 3 Al 5 O 12 (Nd:YAG) laser ablation thresholds for both enamel and dentin tissues. Fur- thermore, 5 ns pulse durations ensure the minimum possible heating and consequently excluded damage to the dental hard tissues as compared to picosecond (ps) and femtosecond (fs) pulse durations. In addition, there is insufficient information regarding the ns, Nd:YAG laser ablation for both enamel and dentin. In this field, most of the studies focused on certain type of lasers such as Erbium family or Ti: Sapphire lasers.
Materials and Methods
Ethics statement This study was approved by Research Ethic Committee of King Abdulaziz University Hospital and according to the ethical guidelines of the Declaration of Helsinki. Written informed con- sent was obtained from patients. Extracted Sound teeth were collected from them during the course of orthodontic treatment. Teeth samples Fifty extracted sound human teeth, (non-carious third molars and premolars) for orthodontic purposes were used. Teeth were cleaned from adherent materials using water and ultrasonic unit [ 30 ]. For sterilization, samples were placed in sodium hypochlorite for 5 minutes, and then they were kept in phosphate-buffered saline (PBS) with 0.02% thymol to inhibit bacterial growth until samples were used [ 31 ]. The samples were prepared as slices and then polished in order to satisfy the experimental requirements according to reported protocols [ 9 , 32 ]. A num- ber of slices parallel to the occlusal surface were processed using a water-cooled low-speed dia- mond wheel saw model 650 (SBT INC., CA, USA). Every slice thickness was 2 mm. Laser system In this study, the laser system that has been used, was ULTRA CFR Nd:YAG (Big Sky, USA). It operates at wavelength of 1064 nm, delivers Q-switched pulses at of approximately 5 ns dura- tions, repetition rates of 1 to 20 Hz, a maximum average power output of 600 mW, and pulse stability of ±3%. System allowed independent adjustment of three variables: average power, repetition rate, and power density. The laser beam was focused onto the slice surfaces using a 7.5 cm focal length Plano convex lens. The laser energy density distribution over the surface at the irradiation spot is close to elliptical with diameters of 316 and 587 μ m on the sample. The energy density varies from 1.2 to 26.39 J/cm 2 . Morphological and elemental tests
The morphological changes were characterized using Field Emission Scanning Electron Micro- scope (FESEM) model Zeiss Ultra60 (Carl Zeiss, Jena, Germany). SEM was used to get clear observations after laser irradiation. In SEM, the sample must be electrically conductive; other- wise, the surface of the sample has to be coated with a very thin film using materials such as gold or platinum to reduce the charging in the sample. To avoid this problem, energy filter (r- filter) was used to make it possible to observe the surface morphology and the nano-structures ’ morphology. Gentle beam (GB) mode was used for decelerating the incident electrons just before they hit the sample and for reducing the incident electron penetration and the charging in the sample. The GB mode gives high-resolution images without damaging the sample sur- face [ 34 ]. Moreover, EDX analysis was accomplished to detect the changes in the elemental composition after irradiating the teeth by laser.dental laser accessories

Results
The ablation threshold is generally defined as the minimum energy density that atom needs to escape from the material [ 35 ]. Therefore, ablation threshold was defined as appearance of min- imal intensity of calcium line by using LIBS. Enamel and dentin tissues were ablated with Nd: YAG laser operating at 1064 nm, with a 5 ns pulse duration, and 1Hz repetition rates. When a high power pulsed-laser beam hits the target, it leads to local heating and evaporation of the sample materials. The ablated materials form the plasma plume, which expand in the ambient atmosphere [ 36 ]. From this point, there is a relationship between the plasma intensity and the ablated material. Using higher laser energy leads to obtain higher plasma intensity and ablated material. LIBS allows to define both the element in the sample and plasma intensity. The inten- sity of emission line is proportional to the number density of emitters, which is proportional to the concentration of the emitter in the irradiated sample [ 37 ]. Therefore, the emission intensity is linearly correlated to the concentration of given species in the sample [ 37 ]. Fig 1 shows the enamel and dentin LIBS spectra. These spectra reveal that calcium lines appeared at 393.3, 396.8, 422.6, 442.5, and 445.4 nm. The peak areas of these lines were calcu- lated at different energy densities for both enamel and dentin tissues. The relation between the peak areas of calcium lines and energy densities for both enamel and dentin are represented in Fig 2(a) and 2(b) , respectively. Fig 3 shows SEM images of enamel surface top view that was irradiated using laser energy density of 11.2 J/cm 2 at 100 shots, while SEM images of the top view of dentin surface that was irradiated using laser energy density of 17.2 J/cm 2 at100 shots are shown in Fig 4 . Elements atomic % of dentin and enamel were studied using EDX. Since, a hydroxyapatite compound contains elements with low atomic numbers, such as Ca, P, and O. Fig 5 displays the EDX spectra of non-irradiated enamel tissue and irradiated enamel tissue by energy density of 11.2. Six elements (Ca, P, O, C, Na, and Mg) can be noticed in the EDX spectra. In addition, Fig 5 shows increasing in the peak of carbon element in the irradiated samples compare to the non-irradiated samples. Table 1 lists the elements atomic % of non-irradiated and irradiated enamel tissues using energy densities of 5.6, 11.2, and 17.2 J/cm 2 , while Table 2 lists the ele- ments atomic % of non-irradiated and irradiated dentin tissues using the same energy densi- ties. Na and Mg were neglected because of their low concentrations. Thus, they were not listed in Tables 1 and 2 . For enamel tissues with tested energy densities, Table 1 shows that there were significant decreases in the element atomic % of O, Ca, P, and C elements. In addition, there was a significant tandem increase in the atomic % of C in enamel tissues with increasing the energy density. On other hand, there were no significant changes in all of the elements atomic % with respect to dentin tissues when energy density of 5.6 J/cm 2 was used for ablation.