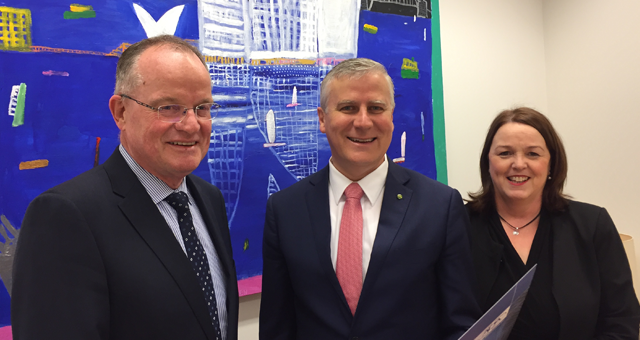 As part of its longstanding and ongoing advocacy efforts on behalf of the dental profession, the ADA's CEO Robert Boyd-Boland and Deputy CEO Eithne Irving met yesterday in Canberra with The Honourable Michael McCormack MP, the Minister for Small Business, and Senator Stirling Griff, the Nick Xenophon Team (NXT) Health spokesman.

The outcomes from both meetings were uniformly positive, proof that consistent representation to Government, the Opposition and the crossbench yields tangible dividends for ADA members.

In both meetings, the ADA stressed that while the dental profession was active in a number of equally important sectors, the majority of dental care in Australia is provided by private practitioners in small to medium-sized businesses. These practices are encountering a number of key issues in operating their practices and providing appropriate treatment to their patients.

The first concerns the practice by a number of private health insurers to divert their policyholders away from their regular dentist with the promise of financial benefit. This tactic interrupts the all-important continuity of care which is essential to quality dental health delivery and poses a threat to the viability of a number of practices.

In addition, the ADA raised the issue of differential rebates, with the Association arguing that this constitutes a form of discriminatory behaviour that should be ameliorated by lower premiums for those receiving lower rebates or standardised rebate amounts by the provider for the same service.

The third issue, and the most striking example of questionable behaviour in this space, is BUPA's recent move in South Australia, where it holds a 52% share of the market, to advise contracted dentists that all dentists in the practice must be contracted to the fund or none of the dentists would be recognised for the purpose of giving rebates to patients. The ADA believes that this could be considered a form of third line forcing, placing the fund in contravention of the Competition and Consumer Act.


Finally, the ADA highlighted the ability of funds, through claims by patients, to have access to the prices, treatments provided and overall busyness of dental practices. This visibility of commercially sensitive data provides the funds with an unfair competitive advantage, one which ultimately has a detrimental effect on practices not aligned with a particular insurer.

The Minister for Small Business acknowledged the validity of the ADA's argument that price is not, and should not, be the sole determining factor when determining if someone has acted in an anti-competitive manner while Senator Griff confirmed that NXT remain committed to hosting a Senate Inquiry into the operation of private health insurance.
​
These are wholly positive outcomes for the dental profession and ADA members who are operating in a competitive arena that can be inimical to their interests and which politicians and regulators must work together to change for the better, in order to preserve the long health of the profession and the people it treats.