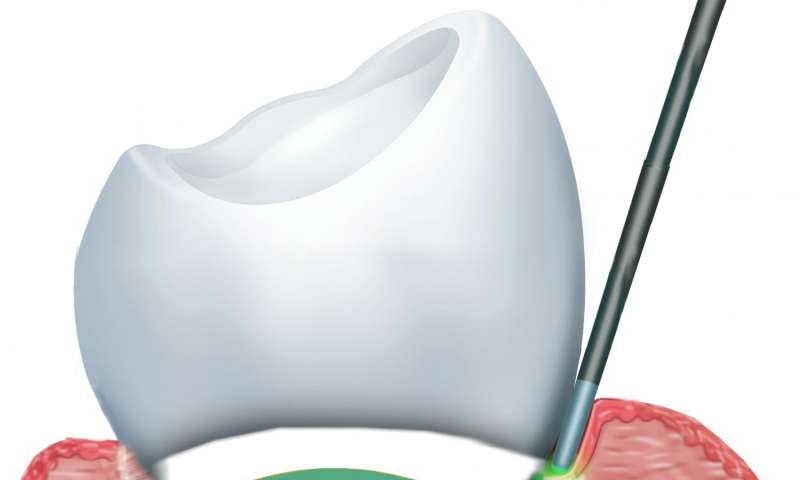 In a study published in the journal Lasers in Surgery and Medicine, the researchers show the results of simulations depicting various laser wavelengths aimed at virtual bacterial colonies buried in gum tissue. In humans, actual bacterial colonies can cause gingivitis, or gum inflammation. Gingivitis can develop into periodontal disease, which involves a more serious infection that breaks down the bones and tissues that support teeth.

"The paper verifies or validates the use of lasers to kill bacteria and contribute to better health following periodontal treatments," said co-author Lou Reinisch, Ph.D., associate provost for academic affairs at New York Institute of Technology.

Drawing on his background in physics, optics, and calculus, Reinisch, an expert in laser surgery and an associate editor with the journal, created mathematical models based on optical characteristics of gum tissues and bacteria. He then produced simulations of three different types of lasers commonly used in dentistry and their effects on two types of bacterial colonies of various sizes and depths within the gum models.

"One of the questions we asked is how deep could the bacteria be and still be affected by the laser light," said Reinisch. The simulations indicate that 810 nm diode lasers, when set to short pulses and moderate energy levels, can kill bacteria buried 3 mm deep in the soft tissue of the gums. The 1064 nm Nd:YAG laser is also effective with similar penetration depth. Both lasers spare the healthy tissue with the simulations showing minimal heating of the surrounding tissue. Minimizing the thermal damage leads to faster healing, says Reinisch.

"The findings are important because it opens up the possibility of tweaking the wavelength, power, and pulse duration to be the most effective for killing bacteria," Reinisch says. "The doctors will look at this and say, 'I see there is a possible benefit for my patients in using the laser.'"

"The study reveals what's going on in the tissue, so I hope that we're educating the medical professionals by demonstrating that you can do a good job of killing bacteria with certain lasers," says co-author David Harris, Ph.D., director of Bio-Medical Consultants, Inc., which specializes in medical laser product development. "When you do this treatment, you remove an infection and allow tissue to regenerate. Getting rid of the infection means the tissue can heal without interference."

A computer simulation of laser use on gum tissue. Credit: Lou Reinisch, Ph.D

The cost of dental lasers can range from $5,000 to over $100,000, according to Reinisch, and health care professionals require extra training to use them. These costs are passed on to the patient so Reinisch notes there must be a definite benefit for the patient to justify these costs.

Harris noted that the Academy of Laser Dentistry estimates that at least 25% of US dental offices have dental laser capability for periodontal treatment as outlined in the paper, along with a host of other soft tissue surgical procedures and hard tissue procedures like removal of dental decay.

"This is a great way to present to the doctor esoteric scientific findings in a clinically meaningful format," he said. "The model is a great tool for making predictions of what can happen in the tissue. Our study confirms its use as a way to determine the most effective laser parameters to use clinically."dental laser tips

In a first for the journal, the published results include video depictions of the computer simulations. The journal readers can actually see the soft tissue of the virtual gums and bacteria heat up and cool down as the simulated laser is scanned over the tissue.

Guided by the results presented in this study, both Reinisch and Harris expect that clinical trials will be designed to validate the findings.

The study, entitled "Selective Photoantisepsis," is published in the October issue of Lasers in Surgery and Medicine.