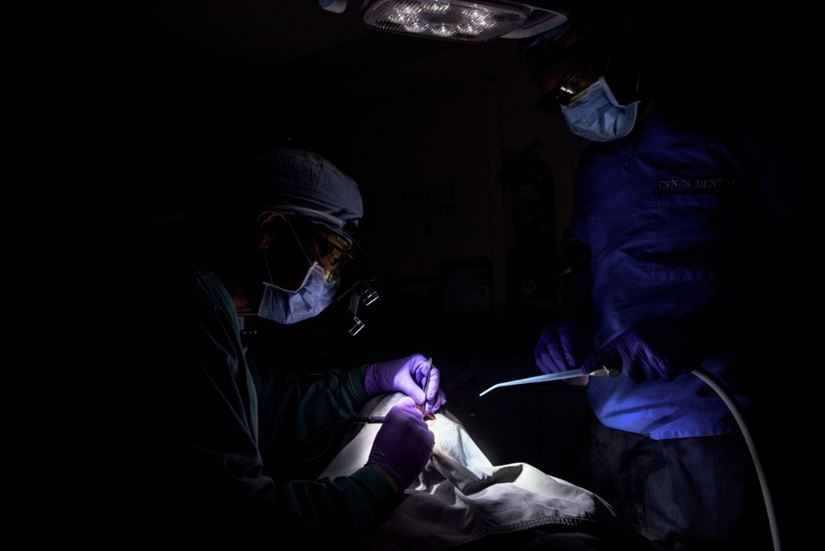 During a frenectomy, Navy Capt. Jaime Quejada explained, the lingual frenulum, the band of tissue that connects the underside of the tongue to the floor of the mouth, is severed to increase the tongue’s mobility. Quejada is an oral and maxillofacial surgeon.

“This is the first time lasers have been used in medicine and surgery for a forward-deployed naval forces carrier, so it’s a big deal for us,” he said. “In terms of the patients, they recover faster. There’s less trauma to the tissues, and there’s less chances from an inadvertent cut or incision because the laser is very precise.”

A limited range of motion of the tongue can produce a variety of effects, Quejada said, including issues related to breastfeeding, to speech problems, hygiene problems and issues performing simple tasks, like licking one’s lips, eating an ice cream cone or kissing.

Using the laser for oral surgeries reduces the incidence of patient bleeding, he said.

“The laser is perfect for that,” Quejada said. “Under the tongue is a very vascular area. If you do incise it with a scalpel, it bleeds a lot. Then, you need suction. When you apply suction to soft tissue it gets sucked up and then you’re not sucking anything, so you have to apply gauze, which is very inconvenient and not very elegant -- so the laser really simplifies things because there’s hemostasis, or lack of bleeding, when we are making our incisions or excisions. We can see better, and when a surgeon can see better he can do better.”

Quejada said he looks forward to using the laser for other surgeries in the ship’s dental department.

“This one is optimized for soft tissue,” he said. “In contact mode, the laser is emitted when it comes in contact with the surface of the tissue and can be used to cut like we did here today. It has a very controlled depth. If you’re working around very delicate blood vessels or nerves, you can constrain the depth of the cut with each pulse.

In indirect mode, the laser can be used for a variety of treatments, like gingivitis, Quejada said.

“When you have gum problems, your gums start to recede,” he explained. “The reason it recedes is because the toothbrush can’t get to the bottom of the gingival crevice [the space between the exposed tooth and the gum]. It’s normally one to two millimeters.dental laser tips

If it’s deeper, like four or five millimeters, your brush can’t get to it,” Quejada continued, “so you can be brushing all day, but you can’t get to the bottom. The laser in indirect mode works great for that because you can apply it without contacting the tissue and the laser kills the bacteria that live down there. That’s been a major boon to the gum specialist.

The dental laser is “going to change our lives in terms of the procedures that we can do because the patients can return to work quicker,” Quejada said. “If we can shorten their recovery time, that’s the biggest plus for us in terms of giving them a better experience.”

“I’m in day four of the post-op process and still have a little bit of swelling, so it’s affecting the way that I talk right now, but I have free movement,” Wright said. “I have tested how far I can stick it out and it’s been going pretty well so far.”
He added, “The laser surgery minimized the amount of bleeding I would have had to deal with, so that’s pretty good. The first day there was a little pain, but it’s pretty much been smooth sailing from there. If there’s anyone who’s thinking about having it done, I would highly suggest it. It’s been a great experience.”