Ultrasonic instrumentation is an important method of debridement. Its use, however, can cause patient discomfort, especially when incorrect technique is employed. Ensuring that ultrasonic instrumentation is effective and reducing patient discomfort are critical to the technique's success.
Many patients prefer ultrasonic instrumentation for periodontal debridement.1 However, the discomfort that some patients experience during the application of this technique can interfere with its acceptance. Sensitivity is an individualized and subjective experience, but clinicians need to be prepared to adjust their technique and administer pain control when faced with patients experiencing sensitivity and/or discomfort during power instrumentation. While pain management during periodontal debridement is key, the most important factor is the successful removal of plaque biofilm, calculus, and other plaque retentive causes in order to support patients' periodontal health.
Patients may experience discomfort due to the mechanical procedure and/or the presence of dentinal hypersensitivity. This sensitivity may be caused by dentin exposure due to recession,2 exposure of the root surfaces due to previous scaling and root planing,3 enamel or dentin erosion, or enamel/dentin abnormalities. Mechanical, thermal, chemical, or osmotic stimuli cause these pain sensations.3 Biofilm accumulation and tooth whitening can initiate these stimuli.2 Dentinal hypersensitivity is quite common. In a study of 787 dental patients, one in eight were found to have experienced sensitivity.4 In the study, those with sensitivity were more likely to be young (18-44), female, users of at-home whitening treatments, and display signs of gingival recession.4

Poor ultrasonic instrumentation technique can cause sensitivity. In a study that assessed the pain intensity during and after ultrasonic instrumentation among 20 patients with chronic periodontitis, 100% reported some incidence of pain; 85% experienced moderate discomfort; and 15% reported mild pain.5 Forty-five percent of the same subjects chose to take 400 mg of ibuprofen after treatment was complete.5 Another study compared patient comfort and periodontal healing post-ultrasonic therapy.6 Twenty-two subjects were treated with either hand-activated or power-driven instrumentation over two appointment periods within 1 week. Mean pain scores were higher for the manual-driven than the power-driven debridement, but sensitivity scores were slightly higher in the ultrasonic debridement group.6 Temporary, slight sensitivity was a commonly reported side effect.6 Anecdotal reports about discomfort experienced during and after ultrasonic mechanical debridement are common, with root sensitivity or enamel hypersensitivity serving as the most frequent culprits.

When sensitivity occurs during ultrasonic debridement, clinicians should assess the ultrasonic instrument's level of energy output. This refers to the relationship between frequency, power, and other factors affecting the debridement procedure. Ultrasonic frequency impacts the speed of the ultrasonic insert/tip's (UIT) movement, while power controls the distance the UIT travels across the tooth in one vibration. Many clinicians can adjust their instruments' power output, but not their frequency because auto-tuned units do not have this capability.

FIGURE 1. This diagram depicts amplitude or power with an ultrasonic instrument. A represents a low setting, while B designates a high setting.

Assessing the ultrasonic instrument's power level is critical to reducing discomfort. Adjusting the power level changes the energy output needed to remove calculus, fine deposit, and plaque biofilm. As early as 1986, researchers concluded that as amplitude increases, the output of power also grows, enhancing the chipping action of the UIT.7 Thus, an increase in power causes the UIT to travel more during a single vibration (Figure 1). Displacement amplitude varies between each UIT.7 An in vitro study evaluating tooth substance loss found a significant difference based on power setting in a magnetostrictive unit.8 The least amount of calcium was lost from the dentin when the power setting was at the lowest level.8 The loss of dentin may lead to hypersensitivity by exposing dentinal tubules to stimuli. Therefore, in susceptible patients, a low power setting may be indicated to enhance comfort. However, clinicians need to be aware of the increased risk of burnishing tenacious calculus deposits when ultrasonic instruments are used at low power.9

Regarding the duration of exposure, the longer the time spent instrumenting one area, the greater the energy delivered to the surface, which increases the likelihood of patient discomfort. To reduce this risk, clinicians should keep the UIT moving in a patterned sequence for effective debridement.10,11 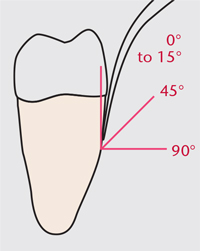 FIGURE 2. For angulation of the ultrasonic insert/tip-to-tooth, 0° to 15° is ideal for many situations.

Only the pressure needed should be applied during ultrasonic instrumentation. In most instances, the pressure, or load, is light. Significantly increasing pressure with the grasp and UIT contact could heighten sensitivity. The best approach is to let the instrument do the work. Increasing pressure might, at first, bolster the effects of the vibrating UIT; however, too much pressure can cause the energy to dampen or stop. Thin UITs are particularly susceptible to loading, which could negatively impact outcomes12 by leading to incomplete deposit removal and/or burnishing of calculus deposits.

Clinicians must also remain aware of the UIT-to-tooth angle. The greater the angle of application—up to 90°—the greater the energy output.13 The ideal UIT-to-tooth angle is 15° or less to the surface being treated (Figure 2). Significantly increasing this angle to 70° to 90° occurs most often when moving from one surface of the tooth to another such as the buccal to the mesial. Therefore, self-assessment of technique, especially at line angles, is paramount.

Additionally, the surface of the UIT being used for debridement should be evaluated. Piezoelectric tips emit the greatest energy from the back and front, while the side surfaces emit the least amount of energy. In comparison, magnetostrictive inserts emit energy from all surfaces. The point of the magnetostrictive insert emits the greatest amount of energy, while the lateral surfaces generate the least (Figure 3). Using the point of any UIT is indicated only for fracturing large, tenacious deposits. It is contraindicated on dentin and enamel because of the potential for causing defects and striations. 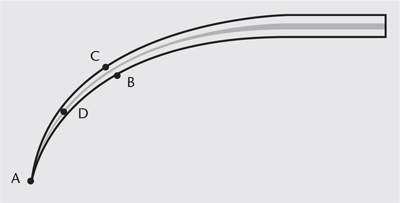 Janalik et al14 noted that evaluating mechanical damage of the enamel surface during ultrasonic instrumentation is important because they found that using the point of the UIT damaged the dental enamel. There was a high variance in defect depth depending on the length of debridement and the part of the UIT that was adapted. The side of the UIT produced the shallowest defects in the shortest time period.14 In fact, using the point resulted in four times higher median values of defect depth than did using the side of the UIT in the same time period. Therefore, the authors concluded that following safety precautions when using a power-driven instrument is critical during routine debridement, and that using the side of the tip and constant movement are essential to reducing the risk of enamel damage.14 However, this study was conducted on aged canine dental enamel, which limits the veracity of the results.

The effect of UIT design on sensitivity and discomfort is unclear. If sensitivity is encountered with a large, traditional UIT, trying a thin, probe-like UIT may be helpful. In a small sample of 20 patients, researchers found that a slim piezoelectric tip used for supragingival calculus removal resulted in reduced pain sensations when compared to a traditional style utilized with the same generator.15 The study also found that while debridement took longer with a slim tip when compared with a traditional tip, participants were more comfortable.15 The authors suggest this minimum amount of discomfort might enhance patient compliance with power-driven instruments.

If a tenacious deposit is challenging to remove with low power and light, overlapping strokes, clinicians should consider moving to a more productive surface of the UIT (Figure 3). If this strategy is not successful, the frequency on a manually tuned unit can be increased. Clinicians using auto-tuned units should try exerting more pressure and/or increasing the power. Moving from a fine UIT to a larger UIT may also be helpful.

FIGURE 4. This is the appropriate adaptation for subgingival biofilm removal, which uses 2 mm to 4 mm of the side of the ultrasonic insert/tip. However, if the biofilm was located near the cementoenamel junction, this adaptation would be incorrect.

Generally, the instrument-to-tooth angle should be maintained at approximately 15° or less, with about 2 mm of the UIT's surface contacting the tooth. With biofilm removal, however, using the maximum surface area (2 mm to 4 mm) and the appropriate side of the tip is most effective, provided the adaptation fits the tooth anatomy (Figure 4). An in vitro study comparing magnetostrictive and piezoelectric devices with the same UIT design, consistent pressure, and medium power showed that the most efficient biofilm removal occurred with a side application (the convex front part) of the magnetostrictive insert.16 Both devices and UITs, however, detached biofilm when compared with the study control.16 There is potential for hypersensitivity during debridement of plaque biofilm because the UIT is in direct contact with the tooth at all times.

Many options for pain control exist in dentistry. Testing these techniques—both pre- and post-ultrasonic treatment—aids in patient comfort and acceptance. Most patients undergoing initial periodontal therapy will need local anesthesia. Even so, careful attention to correct technique is important because many of the same sensitivity triggers that occur during instrumentation may also cause permanent or temporary root sensitivity after debridement. If an endoscope is available, direct observation can be used to evaluate when complete calculus and biofilm removal is achieved and another area should be addressed. If post-operative sensitivity occurs, it might affect patient compliance with self-care and recare intervals for periodontal maintenance therapy.

Patients receiving prophylaxis may experience sensitivity during the ultrasonic procedure. These patients are often not anesthetized and may already have dentinal hypersensitivity. In this situation, an appropriate desensitizing agent should be applied prior to ultrasonic instrumentation to reduce sensation during debridement.

Striving to find the balance between relative comfort and efficacious deposit removal can be challenging. Understanding the subtle differences in energy output and remaining willing to adjust this energy can enhance patient comfort and instrument efficiency. Both the time the root is exposed to the ultrasonic energy and the contact pressure affect patient comfort. Also, how the clinician angulates the UIT and the surface of the UIT being applied are important factors to review to decrease iatrogenic patient hypersensitivity. Additionally, a low water temperature and slim tip could decrease the chances of discomfort during care. To provide safe, efficacious, comfortable, and patient-centered care, clinicians need to pay close attention to ultrasonic instrumentation technique.