KU seen as most likely site for new dental school 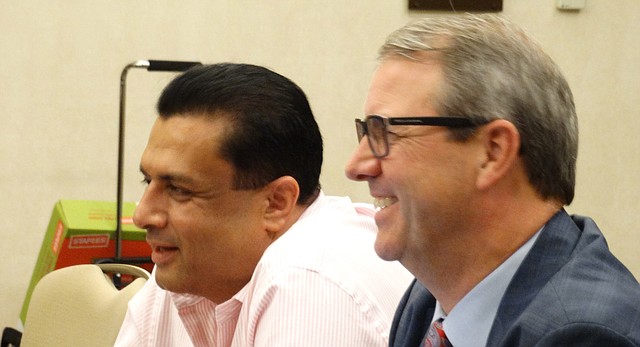 Wichita — Solving a critical shortage of dentists in Kansas may require establishing the state's first-ever school of dentistry, and the University of Kansas Medical Center, in Kansas City, Kan. would be the most feasible site for such a school.

That was the message delivered Tuesday to the Kansas Board of Regents. But neither the board nor KU has yet signed on to such an idea.

"We're underserved, and a significant amount of our workforce is going to be retiring in the next several years, and we don't have people in the pipeline to backfill that," said Dr. Doug Girod, executive vice chancellor of the medical school.

According to a 2011 report, an estimated 57,000 Kansans at that time lived in dental care service "deserts," meaning there is no practicing dentist within 30 miles of their homes.

And although the problem is most severe in rural areas, the report said that even in urban areas, children, elderly people and low-income families have difficulty accessing dental care.

Kansas currently does not have a dental school. But since 1964, it has had a reciprocal agreement with the state of Missouri that allows Kansas residents to pay in-state tuition to study optometry and dentistry at the University of Missouri-Kansas City.

In exchange, students from Missouri have been allowed to pay in-state rates to study architecture at KU and Kansas State University.

But Regent Daniel Thomas, who headed the task force before he was appointed to the board last year, said Kansas has not been getting its money's worth out of that deal.

He said Kansas has trained far more architects from Missouri than UMKC has trained dentists from Kansas, and few of the dentists coming out of UMKC end up practicing in Kansas outside the Kansas City metropolitan area.

That reciprocal agreement was just renewed June 30, with no changes to the terms of the agreement.

In 2009, the Board of Regents authorized an Advanced Education in General Dentistry program at Wichita State University, hoping that would produce more dentists practicing in Kansas. But in the seven years since then, Thomas said, only 30 people have graduated from the program, and of those, only six have stayed in Kansas: five in Wichita and one in Salina.

Thomas and Girod outlined a two-phase plan for addressing the current shortage, starting with a recommendation to establish more reciprocal agreements with dental schools in Nebraska, Colorado, Iowa, Oklahoma and other nearby states.

But the longer-term solution, they said, would be for Kansas to establish its own dental school that would focus on recruiting Kansas residents to study there and operating clinical sites that could offer low-cost dental care in underserved areas of the state.

And of all the possible locations for a school, they said the KU Medical Center would be the most feasible because it already offers basic medical training required in dentistry, and because it has available space that could be converted for use as a dental school.

Girod said KU could establish a four-year program that would admit about 60 students per year. He estimated the start-up cost of such a school at about $43 million. If tuition were set at rates comparable to other schools, it would need an additional $6.5 million of funding from the state.

KU Chancellor Bernadette Gray-Little, however, said KU is not yet advocating for such an initiative. And Board of Regents Chairwoman Zoe Newton of Wichita said the board itself has not yet taken a position on the idea.

"This is the first time that I've heard about it and we haven't even talked about it as a board," Newton said.

She said the board may continue discussions in the coming months before deciding whether to include such a plan as part of a future package of requests for the Kansas Legislature.