07/09/2016  |  Tags: dental laser accessories, dental laser,
If a smile can light up a room, then “a stolen smile can turn the lights out really quick,” said Roger Embrey of Palm Springs. Embrey should know. His false teeth were stolen just over a month ago.

To make matters worse, the Air Force Reserve veteran has been sleeping under the stars — “cowboy style” he calls it — during the eight years he’s been homeless. One night he left his upper denture on the ground beside him and in the morning they were gone. Considering they would have no use or value to anyone else, it was an inexplicable theft.

The cost of a new denture seemed astronomical and he has no insurance coverage. Embrey works occasionally as a painter, a handyman, whatever he can find, but sometimes “I live on about $10 a week eating Ramen or a bag of chips.”

“I won’t use a cardboard sign and beg for money,” he said. He wants to work, but being toothless means rarely finding work. “Without a smile, I’m fired before I even get hired.”  Severely depressed, he added, “I wanted to walk in front of a truck.”

Embrey’s luck changed dramatically when he walked in the door of Synergy Smile Designs, a cosmetic and dental implant center on Tahquitz Canyon Way in Palm Springs. He asked about new dentures, first with Stefan Eade-Hill, a treatment coordinator, who listened to his story and referred him to Dr. Kianor Shah, dentist and dental director at Synergy Smile.

Born in Iran and raised there to the age of eight, Shah moved with his family to the United States and worked his way through dental college doing construction work for $5 an hour. “Not all of us were born with a silver spoon,” Shah said.

Shah decided to donate his time and pay for the lab work and other costs to restore Embrey’s smile. He also plans to do other dental work that Embrey needs. “This should not happen to a veteran in America,” he said about Embrey’s predicament.

The value of the dental work can range from $2,000 to $3,000 or more, Shah said. Embrey gladly helped defray some of the cost by doing painting work for the dental office. He also followed Shah’s advice to check in at Roy’s Resource Shelter for a meal and a hot shower.

Embrey, a Palm Springs High School graduate, said he wants to go to College of the Desert. His dream is to work with animals and return to the veterinary assistant work that he did years ago. Shah said he plans to drive Embrey to the college, help him with enrollment and the financial aid office for assistance. Embrey also dreams of finding permanent work, renting an apartment and reconnecting with his 12-year-old son.

The 37-year-old became homeless eight years ago after losing a job in an automotive oil change shop where he had been employed for seven years. Then Embrey lost his small apartment and took to the streets.
Roger Embrey, 37. 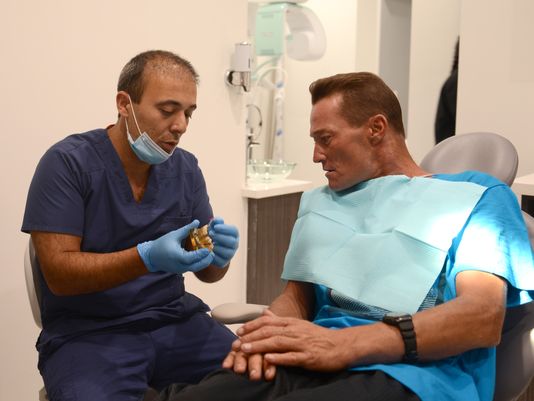 Some people who have heard about Embrey’s plight have donated new clothes, shoes and other items, which are stored in what is called “Roger’s Closet” at Synergy Smile. Since he has no phone or email, Synergy Smile Designs is also serving as Embrey’s answering service, taking messages or donations and helping him get back on his feet.

Embrey now wears new clothes by Oakley, thanks to Renee Myers, who works at the clothing company and is a dental patient of Shah. “Oakley often donates clothing to churches and other organizations, but we never see who wears them,” Myers said. “It’s a joy to see what a simple act of kindness can do for a person.”